View source
WORK IN PROGRESS ALERT!
This page or section is in the process of an expansion or major restructuring.

5 + 1 Heavenly Tribulation was an unprecedented event where 5 tribulation transcenders accidentally had their tribulation together due the of the +1.

Sea King and the purple-robed cultivator planned to make Shuhang transcend his tribulation ahead of schedule, thus unprepared.

As Seven Lives’ Talisman about to leave Medicine Master’s Residence, an old man blocked the way out. There was a strong aura of death on the old man’s body, which was a sign that his life span was about to come to an end. Besides the aura of death, the old man’s realm was the same as Song Shuhang’s—peak Third Stage Realm and about to attract the tribulation at any moment.[1]

Earlier, the Nine Serenities evil energy had erupted from True Monarch White Crane’s body, alarming Dao Priest Faraway Place. As such, he rushed there as soon as possible. If it was a Demon of the Nine Serenities and he could kill it, he would do so. If he couldn’t, he would ask his fellow disciples for help.[2]

Faraway Place tried to leave, but the unnamed ghost cultivator, who at this time already lost his reasoning, threatened

“Three people can play Fight the Landlord, four can play mahjong. What shall five people play?„

Demon Monarch Pāramitā was horrified when he realised that there are five tribulation transcenders in one place. He immediately tried to leave with Always Far.[3]

When the small box was opened, a seal placed on the body of the cultivator was removed. In the blink of an eye, the aura of the cultivator of the Mysterious Wind Valley rose sharply from average Second Stage Realm to peak Second Stage Realm. Strong and violent true qi gushed out of his original dantian, dragon tail, dragon claw, dragon body, dragon palm, dragon neck, dragon head, and dragon horn dantian, arousing the power of heaven and earth.[3]

Song Shuhang, Seven Lives’ Talisman, Pāramitā, Faraway Place and East Six used their strongest attacks, resulting in the upper and lower body of that cultivator of the Mysterious Wind Valley being crushed on the spot. However, even with the body completely crushed, the Heavenly Tribulation in the sky did not stop, and continued to condense.[4]

In the sky above Jiangnan University, a streak of lightning split the sky, looks like a thunder snake dancing in the air. Loud sounds of thunder continued to echo.

In the sky, another five thunderclouds varying in size appeared near that thundercloud from before. Then, the six thunderclouds of different sizes all condensed into a single, much larger thundercloud. As Song Shuhang tried to escape the heavenly tribulation by using the power of space of his Lotus Core World on all the participants, everyone was instead trapped to the Heavenly Tribulation Realm.[4]

Because Song Shuhang used the mysterious puppet he found in She Lans cave, the heavenly tribulation further increased its strength to the peak of Eighth Stage.[5] He survived due to striking a deal with Anything Can Sell.[6]

In the sea of thunder, the portion of tribulation power that had locked onto him turned into several human figures. The figures were made of thunder and lightning and had large builds. They wore animal skin and held axes, clubs, and other similar weapons in their hands. They gave off a very primitive and barbaric vibe. Their sharp gazes passed through the sea of thunder and locked onto Song Shuhang. It felt as though primitive men had travelled through time and space, coming to battle.[7]

In the sea of lightning, five bolts of tribulation thunder exploded toward Mansion Lord Seven Lives’ Talisman and the others, as well as toward that puppet core. Given the strength of the trio, it wasn’t a problem to resist the first wave of tribulation thunder. Even the old man, though a burden for the rest of the group, could still resist the first wave of the tribulation. After all, he was a cultivator at the peak of the Third Stage.[7]

The primitive men made of tribulation thunder roared, appearing beside Song Shuhang in the blink of an eye. There were 12 of them in total, and they attacked at both long and short distance. Axes, arrows, spears, and so on flew toward Song Shuhang.[7]

Song Shuhang stretched out his hand and took out his treasured saber Broken Tyrant. His invisible sabre gǔ was still in his Lotus Core World, and he couldn’t take it out. He looked very calm at the moment, and he had a 90% assurance of keeping off the attacks of these primitive warriors made of tribulation thunder.[7] 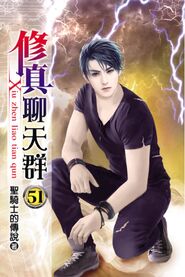 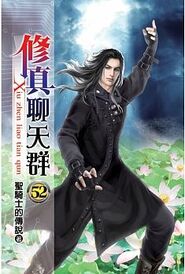