View source
watch 01:25
Jurassic World: Dominion Dominates Fandom Wikis - The Loop
Do you like this video?
Play Sound
WORK IN PROGRESS ALERT!
This page or section is in the process of an expansion or major restructuring.

“Turn back suddenly, discover that your destined person is there, by the waning lantern lights.„

All Heavens and Myriad Realms

Start of the Novel

Soft Feather is a lively, fun loving girl who loves x-sports or anything extreme.

Inspired by Song Shuhang’s Seven Dao Names, Soft Feather decided to have 365 Dao Names, one for each day of a year. She asked her father, then-Spirit Venerable Spirit Butterfly to provide her a new Dao Name every day, much to his chagrin.[4]

Soft Feather is beautiful tall and slender girl with long leg as her distinguished feature.

Soft Feather was practically a natural-born female lead template for movies. Even if she stood still without doing anything amongst the crowd, she still exuded a feeling of being manifestly superior than others, having natural disposition that attracted others’ gazes and being the focus of everything.[1]

The Search for the Ghost Lantern Temple

Soft Feather ‘accidentally’ found the notes her father has written about the Ghost Lantern Temple and the spirit ghost sealed within it. As a result, taking advantage of the fact that her father was at Mad Sabre Three Waves’ home torturing him, she secretly left for Jiangyin City alone, intending to capture the spirit ghost.[10][11]

Soft Feather would never have expected that her discovering her father’s notes, and the whole journey to Ghost Lantern Temple was something that her father had secretly planned out for her. For this journey, Spirit Venerable Spirit Butterfly even sent his disciple, Liu Jianyi to take care of his daughter, it could be said that he had put a lot of thought into this.[12]

Mad Sabre Three Waves could only blame himself for leaping into the line of fire, which saved Spirit Venerable Spirit Butterfly the time for finding an excuse.[12]

As a preparation for the 2020’s Chinese New Year Celebration, Soft Feather together with White captured a Nian.

“We are not children, we must be responsible for our own actions„

Although she isn’t officially considered as a member, Soft Feather has all the traits of an established death seeker. However, Soft Feather understood the risk of death seeking and properly prepared for its consequences.

The first expression package released by Soft Feather, using White as the model. White’s pictures were taken with the help of Song Shuhang.

This package caused a storm in the chat group when it was first released.

An expression package with Song Shuhang as the model.

An expression package with herself as the model.

Soft Feather was widely known as a genius as she already a peak Third Stage Battle King before the age of 40.[14]

Soft Feather was at this stage at the beginning of the novel.

If she wishes to, Soft Feather’s strength was enough for her to kill every member of the Void Sword School’s five Third Stage and multiple Second Stage sans the Fourth Stage retired elder.[15]

“Now that my BGM is playing, I fear nothing.„

Soft Feather encountered the 1 in 10,000 Heart Demon Tribulation.[16] She easily passed the tribulation by using the «Seven Kills Song».

“Is your real surname is Song? Does your full name is Song Soft Feather?„

Doudou was dragged into her tribulation due to the friendship mark he shared with #Tyrant Tyrant.

When her own tribulation about to end, she was involved in Song Shuhang’s Black Dragon Tribulation and became the Thousand Years’ Ninth Saint, Ancient Saint Spirit Butterfly as the result.[19][20]

Soft Feather is the third cultivator with a Markless Gold Core.[21]

Future Soft Feather has shown to use the Way of Time.[22]

Both of them obtained their spirit ghost from the Ghost Lantern Temple and was stolen by a big shot respectively.

Just like Song Shuhang, Soft Feather showed immunities to White’s charms and White Two’s soulcutting aura, although the extant of her immunities aren’t known yet.[23]

Both of them also personally mentored by a Seventh Stage Spirit Venerable and became an Eighth Stage Saint before their respective mentor.[24][25]

Chu Chunying was Soft Feather’s friend from the Chu Aristocratic Family. When Soft Feather was little, she used to follow Venerable Spirit Butterfly to have fun around the world, and that was when she got to know her.[3]

When Heavenly Way White gaze into the future and meet White Two, White Two requested a 'little sister'. In the epilogues, Soft Feather was revealed to be the daughter of the 'little sister' left by Heaven Way White for White Two.

Soft Feather uses 咱 (zán; we (including both the speaker and the person spoken to)) to refer to herself.[26] 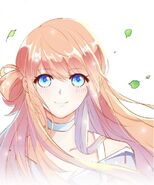